“FIBRE” FOR DIFFERENTIATION AND SPECIALIZATION

In order to expand and strengthen its outlet markets, S.T.L. has decided to invest on an Amada LCG 3015 AJ fibre laser cutting system capable to assure quality and efficiency in the field of sheet metal cutting with sheets up to 3 mm thick. The Amada system is a good compromise between power, reliability and compactness for S.T.L.

S.T.L., a company based in Lurano, in the province of Bergamo, is specialized in the processing of sheet metal, rounds and tubes. S.T.L. mainly manufactures steel components that are mechanically processed, assembled and painted using state-of-the-art technologies. Founded by Mariolino Manzoni (the current President) over 30 years ago, the company is now managed by Elida, Giuseppe and Marco. The main reference market has always been the agricultural and earth movement machinery sector, for which the company manufactures panelling, ladders, hoods, grids, frames and structures for cabins. In the second place, in order of importance, S.T.L. turns to the heating and conditioning sector (by manufacturing components for gas air or water gas generators such as panels, hoods, rotors) as well as the air movement sector (by manufacturing nozzles for air/vacuum pumps, compressors, hoods, fans). However, in these years the Manzoni family has decided to differentiate more and more its outlet markets, reducing the company’s presence in the tractor sector, which in the past represented 70% of the total turnover. “In the last 15 years our goal has been to differentiate our clientele trying to implement our presence in sectors that, even if including sheet metal processing, are different from the tractor manufacturing sector. We have decided to enter in sectors that are complementary to it, trying to offer an increasingly complete and complex product in all of them, both in terms of structure (referring to the bill of materials) and high number of codes to be managed at the same time thanks to a structure that, although with a larger size, retains an increasingly performing flexibility and reactivity. Besides market differentiation, our efforts lead to the achievement of a greater specialization in the perspective of a greater internationalization. This makes possible to assure a continuous growth and absorb any ‘domestic’ repercussions. However, a real internationalization process is only possible with a continuous technological innovation and an ongoing professional training, two aspects that are of particular importance to S.T.L.”. The market differentiation policy that Marco Manzoni has outlined is yielding results: the share of turnover from the tractor sector has now decreased to about 55% while a remarkable increase in orders from the air movement and heating and conditioning sectors has been recorded. For 2016 the company is confident that the market shares referred to these two outlets will be an important share of the total turnover. “Although we are increasingly relying on other sectors, carpentry for tractors is still our main outlet. Our aim is to increasingly work abroad and with high-calibre companies such as the CNH group, for instance, which has recently become an S.T.L. customer” states Marco Manzoni.

From small and simple parts up to complex structures
As highlighted by Giuseppe Manzoni “we are not pure subcontractors, meaning that we have reached a specialization level that enables us to achieve a planning and continuity in orders that any subcontractor would hardly have. S.T.L. follows the product during the whole production cycle, which is quite long in the case of a tractor, about four or five years. It is easy to understand that in such a long period of time the product is subject to a continuous restyling in which we are directly involved. In our activity we do not only make single products, but we manufacture also structural parts or parts for assembled products. Our aim, besides searching for an important and international partner, is to be able to manage the highest number of codes as well as to ensure the supply of quite complex and large products. It is a ‘challenge’ that we believe we have already won: we were born as subcontractors of simple and small parts (such as brackets) and now we provide supports and floor plates for cabins and steering columns intended for Same or Deutz-Fahr tractors (to give just a couple of examples), safety structures such as ladders, and ‘visual’ elements that are increasingly important, both from a functional and aesthetic point of view, such as engine hood stripes. The S.T.L. customer knows that we can be an alley for every project, even the most complex. The ability to manufacture certain products is by itself a certification of our skills and our calling card for the domestic and international market”. S.T.L. is equipped both for the stamping and blanking of several parts. However, the company workshop uses also the laser technology. “We started using the laser about 20 years ago. At first it was mainly used to manufacture small batches or parts with a certain size. Then it has gradually started to replace blanking. In the last years we have observed this trend especially in the tractor sector (where orders have limited numbers), in which blanking – apart from a few exceptions – is gradually disappearing. In concrete terms, the blanking division has become a department for the stamping and drawing of 3D parts that we later finish with the laser in a dedicated plant” continues Giuseppe Manzoni.

After three CO2 laser systems, here comes the fibre technology
Three flat bed laser cutting machines and a 3D laser system have been operating at S.T.L. for several years. “3D has made great strides in the last years, to such an extent that now we no longer talk of blanking, but of drawing. The 3D laser system that we have installed in our company is far from the other laser systems, as it is close to the tooling department because it needs a lot of tooling for part positioning” argues Mariolino Manzoni. “As for two-dimensional lasers, we have three 4 kW CO2 laser machines that process quite thick sheet metal in continuous cycle (thick sheets are typical of the tractor sector). However, in the air movement sector, a field where we are trying to strengthen our presence, we are often required to cut thin sheets (up to 3 mm). In order to meet these needs, we have decided to invest on a fibre laser system, as this is the only technology that would ensure high speeds and low costs on thin thicknesses. At the beginning, also for space reasons, we intended to replace a CO2 machine with a fibre machine, but in the end we have decided to add the fibre machine to the CO2 machines. This choice has proved successful”. The new entry we are talking about is an Amada LCG 3015 AJ fibre laser cutting system, which has been in operation at the company for the last two months. “Besides its capability to ensure quality and efficiency in the cutting of sheet metal up to 3 mm thick, we have chosen the Amada system for its level of automation, an important factor in case of thin sheet handling (separation, loading of single sheets, etc.). The Amada fibre laser system has proved a good compromise between power, reliability and compactness. Every laser system, Amada included, has its own warehouse. However, we are planning to adopt a centralized warehouse capable to service all the machines in the future” says Giuseppe Manzoni. Marco, sales manager at the company, adds: “The fact that Amada holds the whole fibre know-how has clearly played a strategic role in the decision process. We were looking for a single, global solution, and Amada, with its LCG 3015 AJ fibre laser system, has provided it to us”.

High performances not only with low thickness layers
The Amada machinery installed in S.T.L. is a standard plant from a layout perspective. It is a particularly compact system, as the tower lies above the pallet changer, although the machine can be used with a classic pallet changer. A sheet separation system with motorized chains ensures that the discharge of noble materials is carried out precisely, cleanly and without scratching. “Anyhow, I would like to point to the fact that the Amada machinery is used not only for the processing of thin layers, but it is also successfully used for the processing of parts intended to the tractor sector, and above 3 mm thick. However, Amada LCG 3015 AJ really is the ‘ace up our sleeve’ with which we want to become decisively competitive on markets where cutting of low thickness layers is required, such as the air movement sector” states Marco Manzoni. As for the Amada plant management, just as it has occurred for the other laser machines installed at the company, the machinery is controlled by a proprietary software provided by the manufacturer. “As we had never had an Amada machinery, we’ve had to learn a new programming method. The positive aspect has been to find out that we have new and innovative software tools at our disposal, such as Product Designer, which can really make a difference in the co-design perspective, a service that our company makes available to customers who request it” says Giuseppe Manzoni, who “get his hands” on the machine, operatively speaking. It is still too soon to speak of production levels reached on the Amada plant, considering that the machine has been operating at S.T.L. only for a few months. However, the results achieved so far are very encouraging and prospects are excellent. “We have had the opportunity to test the reliability of the Amada LCG 3015 AJ system both on 8-hour shifts and unmanned shifts for several weeks and we are satisfied” says the product manager. When a rumour has come out that we had installed a laser fibre in S.T.L., we have been contacted by several customers that were inaccessible to us because of technological limits until recently. In addition to the possibility to diversify our production capacity (not only high thicknesses, but low thicknesses as well), with the fibre laser we can now cut highly reflective materials, which are a must for this type of technology”. So, what prospects for the future? “S.T.L. invests in a new production system about every year. Therefore, we will ask ourselves whether to buy another but more powerful fibre laser system or not very soon. We will see. Meanwhile, we look around trying to understand what the market has to offer. By the way, I heard that with an Amada 2 kW fibre laser system you can cut steel sheet metal up to 25 mm…” say the Manzoni brothers in unison. 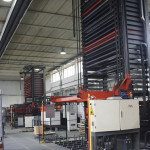 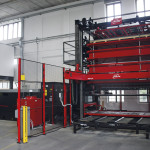 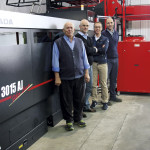 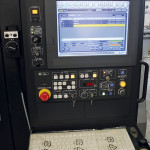 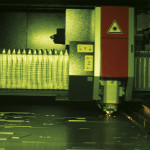 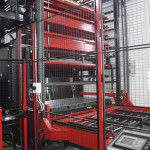